Russ Pitts returns to the podcast to talk about life after Polygon, life in freelance journalism, as well as the process behind and effort required to complete his upcoming book ‘The Making of Defense Grid 2: The Complete Story Behind the Game’. We also discuss the growth of Take This, the formation of a 501 (c) (3) non-profit charity, and the future impact Take This looks to have in the world. Enjoy.

END_OF_DOCUMENT_TOKEN_TO_BE_REPLACED 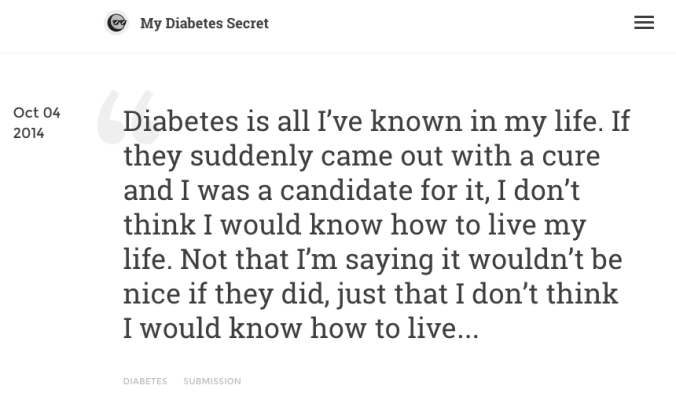 Submitted on My Diabetes Secret (Linked)

The ever-infallible Wikipedia defines Stockholm syndrome as “a psychological phenomenon in which hostages express empathy and sympathy and have positive feelings toward their captors, sometimes to the point of defending and identifying with them.” When I read this submission, this was the first thing that came to mind. I know this secret isn’t exactly the same as the situation described in classic Stockholm scenarios, but there’s enough similarity to merit some kind of conversation around this.

Add this to the list of things they don’t tell you at diagnosis. With all of the time and energy spent focusing on and managing this disease, to suddenly have that taken away, that away would feel…I don’t know how that would feel. I’m sure I would feel relieved. I’m sure I would be incredibly grateful. I’m sure life would go on. But despite my efforts to not let diabetes define who I am, it is an integral part of me.

I’m not a psychologist, but I know enough smart people to pass this along to: is there a medical term for this kind of association with a condition, disease, or mentality? Diabetes isn’t necessarily a ‘hostage taker’ or a ‘captor’, even if it can feel like it at times, but can you really have the kind of emotional breakdown associated with Stockholm syndrome and a person (or persons) with an inanimate ‘captor’ like a chronic disease?

END_OF_DOCUMENT_TOKEN_TO_BE_REPLACED

As shared on My Diabetes Secret.

Add this to the list of things they don’t tell you at diagnosis. Proper diabetes management is so much more than counting carbs and regularly checking your blood glucose levels.

The fun part, however, is even if they told me all the extra stuff I’ve learned in the past twelve years, I wouldn’t have retained any of it. My biggest worry as I sat in that hospital bed was how will I eat a peanut butter and jelly sandwich?

END_OF_DOCUMENT_TOKEN_TO_BE_REPLACED

The Storification of tweets continues as I recap Day 2 of Stanford Medicine X. After the rush of hosting the opening panel the day before, I figured the rest of the weekend would be a walk in the park. Here are some of the stand-out moments from the day, as told by my ability to be clever in the span of 140 characters.

"It's not about the tie, it's about the collaboration." @drmikesevilla and I mean business. #MedX pic.twitter.com/VrBw9NOxPf

(And you should too)

How many conferences had at least one patient as top influencer? 65% – but, these conferences have a median of 1 patient in attendance #medx

We still have a ways to go before being the “token patient” at a conference is a thing of the past.

"There's a robust diabetes online community. Some of them are even here in this room." @joyclee (Waves!) pic.twitter.com/uR7aZGcVIw

"The diabetes community is a huge force online, but there is no literature to support that fact." @joyclee #MedX

"Freedom of mobility is a basic right." @ProstheticMedic telling it like it is. #medx

I'm really proud of #MedX for putting mental health on the main stage. The realest of real talk.

That, right there, is my most important tweet of the day. Maybe even the entire conference.

Maybe the "e" in ePatient stands for empathy? #medx

END_OF_DOCUMENT_TOKEN_TO_BE_REPLACED

Diabetes is as mental as it is physical. A double whammy.

This was shared today on My Diabetes Secret. Considering how little time it’s had to gain traction among the diabetes community on Tumblr, it’s received a lot of notes (likes and reblogs) in very little time. I’m not sure if Tumblr will ever be seen as an official validation for anything within the diabetes online community, but it’s clear that more than just the anonymous person who submitted this secret agrees with the sentiment.

END_OF_DOCUMENT_TOKEN_TO_BE_REPLACED

Hopefully you watched the “We Can Do This” video featuring people living with diabetes and celiac. As powerful as individual stories are, I think there’s something particularly meaningful from a group effort supporting a single narrative (such as “if we can do this, you can do this”). To that end, here’s another entry in the We Can Do This series. This time we’re talking about diabetes and mental health.

Depression is one of the big issues that people (we) are either afraid to talk about, or choose to ignore until it’s too late. I know that there are plenty of resources out there for people struggling with their diabetes and mental health, but rather than pretend to understand what depression and diabetes can feel like first-hand, I think it’s best to let the video speak for itself rather than speak out of turn.

If you would like to contribute to the You Can Do This Project with a guest post discussion how your life with diabetes impacts your mental health, sharing your story could mean the world to someone else who is dealing with the exact same situation.

END_OF_DOCUMENT_TOKEN_TO_BE_REPLACED

You know what I haven’t done in almost a week?

Posted a submission on My Diabetes Secret.

It’s not that the blog isn’t active – there have been plenty of likes, reblogs, and new followers over the past few days. But the submissions have stopped for the moment. If I must be honest (and why wouldn’t I on my own blog?) it’s a welcome break. While I appreciate what My Diabetes Secret has been able to bring to the diabetes community, and while I believe that blog serves a meaningful and worthwhile purpose, it can be a bit much at times.