“Christopher, what do you think about this song for the end of the conference?”

That was the question to me from Medicine X’s conference director, Dr. Larry Chu. I had been somewhat vocal about my support for the true Club MedX experience, including lots of bass, between sessions on Twitter so that earned me the honor of unofficial music consultant as the weekend came to a close. In the middle of our discussion about the the upbeat nature of ‘Titanium’, I asked Dr. Chu about the Google Glass that he was wearing.

He didn’t think twice about it. That’s how cool Medicine X is. That’s how awesome Dr. Chu is.

This is happening. #googleglass #MedX

After a 2-minute tutorial, Dr. Chu was off attending to more important matters and I was left to experiment with the reportedly $1,500 (in beta) device for the duration of the final day of the conference.

For the next four hours, I proceeded to toy around with the various functionality of Glass, while remaining respectful that it was configured for Dr. Chu, his twitter account, and his email. Every time he received an email deemed “important” or a Twitter mention, a chime would sound in my right ear letting me know I could engage with the notification. From what I could tell this meant reading the headline of an email or seeing a full tweet. But reading is not the only thing you can do with Glass.
A simple swipe along the touch interface by the temple or saying “OK Glass” opens up a variety of contextual actions based on the current display. One sequence of events I became quite comfortable with involved taking a picture and sharing it to Twitter with a caption, all using voice commands. Other functionality beyond Twitter and email included recording a video, using Google Maps, and taking notes (I assume with voice commands, but depending on the fidelity of the microphone maybe it could record a speech you were listening to?).

My time with Google Glass was every bit the futuristic wonder you would expect for someone new to this device, my biggest surprise was the realization that Google Glass was not the most extraordinary thing at Medicine X. Aside from the other ePatients, everyone else has already seen this thing. I’m guessing most have tried it at one point or another. Of course this being Stanford, the educational heart of Silicon Valley, I should have come to this realization sooner but I was too busy giggling at the notion that I was walking around wearing “the future”. Here are a few other pictures I took while wearing Glass:

Now realizing exactly what Google Glass is, I really wish I attended Sunday morning’s panel discussing the possibilities and challenges with Google Glass in the medical landscape, especially after a few of the ePatients sitting in that session told me that one of the speakers was focusing specifically on diabetes data integration.
Since I wasn’t able to hear what Nate Heintzman (@diabetesdata) had to say, I don’t want to speculate on or misrepresent him or his work. But trust that I’m actively pursuing him as a podcast guest so we can talk all about this and more.

But here’s a hypothetical for you: First imagine world where wearing Google Glass wouldn’t earn you awkward looks from everyone, then imagine walking down the street and saying “OK Glass, How’s my diabetes?” and seeing your Dexcom reading, your last blood glucose test result, remaining insulin in your system, and for pump users insulin on board, insulin remaining in the pump, and battery life. Imagine all of that data, just five words away.

Candid shot from #MedX with @iam_spartacus and @katiemccurdy.

While the idea of getting information that is merely in my pocket (or for women, in their purse) isn’t exactly revolutionary considering proximity to the actual device, this is where I think things could get really fun – if Google Glass were capable of collating all of that information in one location (the display), surely it could be collected elsewhere in the cloud, like a secure file on your personal Google Drive, right?

Data integration is the holy grail of diabetes data junkies. All of this information is essential to managing our disease but it’s hard to draw meaningful conclusions when we have to do the heavy lifting connecting dots and data points across various systems. If this work could be done for us, imagine the potential learning curve we could ride on the way to a better understanding of our bodies and our diabetes. 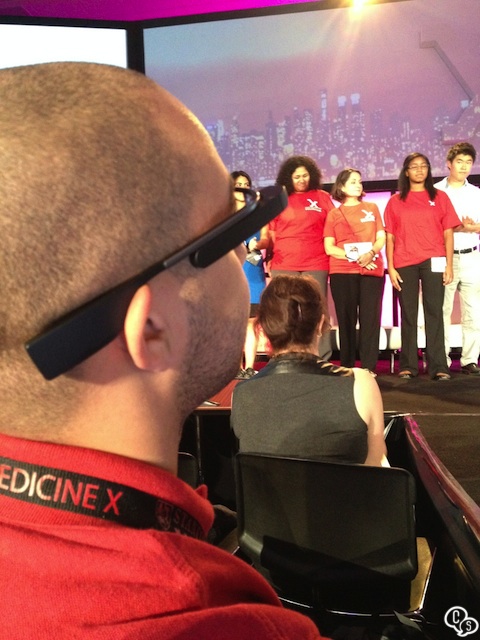 Obviously there are a number of hurdles, what-ifs, barriers, technical limitations and high level mumbo-jumbo that keeps this as a fantasy instead of a tangible reality. But if anything remotely close to that hypothetical is possible, sign me up.

Also, imagine the #dayofdiabetes possibilities with this thing. Rather than trying to frame all of your pictures with your phone and take the time to type out all of your tweets, Google Glass could do all of the heavy lifting for your text, pictures, and videos. And all you have to say is “OK Glass”

Big thanks for Dr. Chu for trusting me to not run off with this thing after four hours. I was awfully tempted.

Only at Medicine X, right?

Dont forget to check out my Storify post on my Medicine X experience.

Disclosure: I was awarded a partial scholarship to attend Medicine X this year. All other expenses, including the remainder of the registration was paid out of pocket. In case there was any doubt, I’m writing about this stuff for me.