I’m sure I’ve told this story before but it begs a retelling considering the importance of this day for the video game community. Ten years ago the Xbox launched. The black bohemoth showed up with it’s goofy looking controller and break-away controller cords with the name Microsoft on the box. Microsoft? Really? Little did I know how big of a deal this system was going to become in my life.

My freshman year at Virginia Tech had its ups and downs. I was diagnosed with diabetes in the fall semester – we know how that’s turned out so far. So there’s that.

In the spring we received a loaner Xbox from a guy living in our dorm who was THE Microsoft representative for Virginia Tech. I’m not sure how he got that gig, and quite frankly it’s not important. What is important is that he had an Xbox with two (or three) controllers and a handful of games that he would lend to other students for a length of time. Like a trial period or something. We received the Xbox early in the semester and it was all downhill after that. Eventually we (me, my roommate and two other friends who became roommates when we moved off campus) bought two additional controllers and would spend unhealthy quantities of time playing Halo on my 13″ television that I snuck into my Dad’s Ford Explorer the night before we left for Blacksburg in the Fall.

How’d that get in here? Oh well, I guess I better take it up with the rest of my stuff…

So yea, Halo. The tribal music, the three-shot pistol, the marathon Co-op sessions on Legendary (our record was 6 hours from start to finish) – Halo was everything the hype on the front of the box said it would be. Combat Evolved? Try Gaming Evolved. My gaming habits evolved down a path that eventually led me to the Talking About Games community – I think we know how that’s turned out too.

With that backdrop, it brings me great pleasure to know that the Original Halo Experience is now complete with the addition of Halo: Combat Evolved Anniversary. I know I’m romanticizing all of this to an unhealthy extreme, but I’m a gamer. It’s what we do. 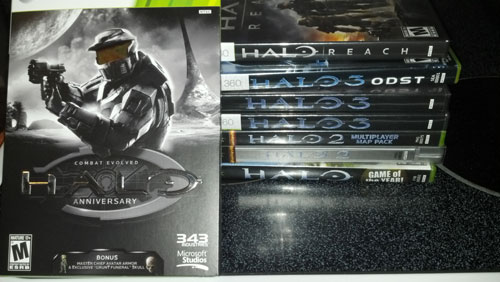 Seriously, what the heck is a Wildcat Destabilization?