This past April I went to the Penny Arcade Expo in Boston, Massachusetts and stayed at the Colonnade Hotel for the duration of the shenanigans. Travel was a big part of my previous job, so the whole hotel booking, checking-in, day-to-day living wasn’t really a problem for me. Maybe it’s because I haven’t stayed in any truly luxurious hotels yet, but everything feels like the same song and dance. Honestly, as long as there is at least one comfortable pillow and free Internet, we cool. With that slightly jaded perspective on hotels, I can say that the Colonnade was a fantastic stay. You don’t need the fine details of every aspect of the hotel, but if you’re going to be in the downtown Boston area, definitely check them out.

Above all the bells and whistles and miscellaneous bullet points the Colonnade had to offer (aside from a twitter account, very cool) was a this rubber duckie. I found it individually wrapped in plastic on the side of the bathtub. I’m not sure what the protocol for something like this is, as I’ve never seen anything like this before, but I interpreted the presentation as a gift to me (or whomever was staying in that room). Much like a mint on your pillow, this was the Colonnade’s gift to me as a token of appreciation for bringing my business their way. So thank you Colonnade Boston.

I’m not sure if what followed was tradition or a simple game of hide and seek, but Duckie has been on quite the adventure since coming back from Boston. Dayle and I would take turns hiding her (yes She, note the eyelashes) in random places in our respective homes. In case you were wondering, Duckie can fit in the top of a Brita water pitcher with ease. Behind DVDs, in a pile of laundry, the oven (turned off), hiding in plants, or anywhere else we could think of when the other was not looking as long as the hiding spot was somewhere we would ordinarily look (or just putting her in plain site works too). In a cupholder, on a car, with a mouse, on a house, I would not, could not…wait, I got distracted.

It’s hard to explain why we’ve continued to keep this up, but I’m glad we still are. Last I checked, she has the duck. I wonder where I’ll find her next. Sometimes it’s the little things that can make a big difference. You’d be surprised to see how effective a Rubber Duckie can be in cheering you up after a miserable day.

Believe it or not, we had a genuine conversation about who would get to keep Duckie while I was at the beach last month. I got the duck, but I did not take this responsibility lightly. What proceeded was a week’s worth of story telling, in picture form, of Duckie’s adventures. I’ve chosen some our favorite for the purposes of adding some flavor to this blog post. For what it’s worth, I think I sent over 50 pictures over the course of the week. 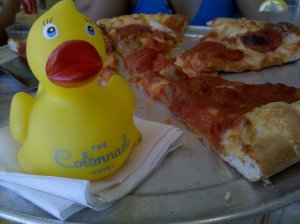 Ready for the sun

Can you see the "Footsteps"?

There's something in the lens... 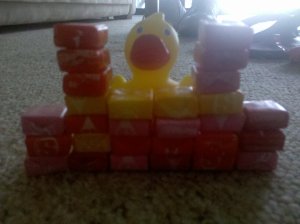 She built a fort made of starbursts

Everyone wants to be buried in the sand 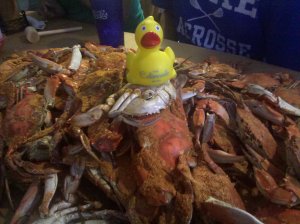 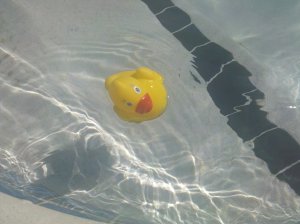 Relaxing at the pool

If you’ve been following me on Twitter, you might notice picture with a rogue duck somewhere in frame, that was intentional. If you were wondering what was up with the random duck in those pictures, now you know. And knowing is half the battle.

Rubber Duckie you’re the one,

You make bathtime lots of fun,